And there's always a few students who want the secret—the magic short-cut that will put them on the royal road to learning math easily. Apparently they think we are hiding some sort of trade secret that enabled us to become math teachers. We must guard it jealously lest we lose our strangle-hold on algebra!

While I disdain one-size-fits-all solutions to students' problems, there are some fairly uniform basic principles. For example, success is usually proportional to effort. Different students must put in different amounts of effort to achieve equivalent success, but the basic principle still holds. Thus I tell my students they have to gauge for themselves how much effort (which translates significantly into allocation of time) they must put in.

In an attempt to encapsulate the idea in a simple bite-size aphorism, I have told my classes, “Do a little every day.”

They blink at this, of course. It sounds deceptive.

“Only a little?” they ask plaintively.

It's a good lesson, and one that I learned later than I should have. During my last encounter with grad school, trying to teach a full-time load at my college while carrying a full-time academic load as a university student, there wasn't a lot of slack in my schedule. Determined not to let things slide (at least, not too far), I solemnly resolved to do a little work on my dissertation every day. Every day. No exceptions. Without fail.

I didn't slice my hand with a subtle knife and swear a blood oath, but I did the next best thing.

I told my grad school classmates.

It became an enjoyable game that anyone could play.

Occasionally I was reduced to paraphrasing Oscar Wilde:

“I was working on the methodology section of my dissertation all day, and took out a comma. In the evening I put it back again.”

And, sadly enough, that was often too close to the truth. Other times, however, an interesting thing happened. I'd be exhausted and ready for bed and then I'd realize I still had to discharge my solemn obligation to tinker on the dissertation. At least a little. Resolving to postpone sleep for just a few minutes, I'd sit at the computer and fire up the word processor. A paragraph. Let's just get one more paragraph in there.

And then, magically, I'd awaken from a trance to discover that half a dozen pages had been written in a two-hour altered state. (Perhaps elves had slipped in and moved my fingers over the keyboard.) Not that this occurred every time, of course, but still often enough to provide the quantum jumps that really advanced my progress toward graduation.

As with any project, completion won't occur without participation. You have to do something.

And that's what I tell my students. 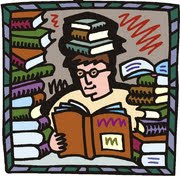 “So choose whatever works best for you. It might be at eight o'clock each evening. It might be when you get home from your morning classes. Whatever. Just plan to sit down with your book and read the latest section or solve the first three, four, or five homework exercises. Pick something and do it. Maybe you'll promise yourself to do at least fifteen minutes of work at that same time every day. Yeah, that's not enough. Fifteen minutes. Maybe if you're a math genius that would be enough. But that's not the point. The point is that you commit yourself to working on it every day. And some days you'll find yourself digging in and getting a lot more done than you might have thought you would—maybe even a couple of hours. Now you're talking! Build a pattern of working every day and keep it going.”

When it's early in the semester, students tend to be in a hopeful mood and try to nod their heads agreeably when their instructor says something. However, the last time I gave an algebra class a harangue similar to the above, one of my students seized on the “math genius” comment.

“But what if you are a math genius?”

The speaker, a lanky kid sitting near the back of the room, was instantly the center of attention.

“If you're a math genius,” I replied, “then you should definitely talk to your math teacher. I know very few and I welcome the opportunity to meet another. Are you indeed a math genius?”

I neglected to point out that the density of math geniuses in college-level introductory algebra classes is extremely close to zero, but no doubt a math genius would have understood what I meant by that.

He nodded his head.

“Yeah, I am,” he modestly admitted. “This stuff is very easy. Very easy. No one should complain about having to take algebra because it is, like, totally easy to do.”

His classmates regarded him with keen curiosity. So did his instructor, for that matter.

“I'm glad to hear that you think so,” I said. “I'm inclined to agree with you, but most of your classmates probably have differing opinions. May I ask how you arrived at your conclusion that algebra is super easy?”

He nodded his head again.

“Yeah, sure. I took it during the summer at the extension center. Like I said, totally easy!”

Everyone paused for a long moment, considering what he had said.

“That raises another question,” I pointed out. “Why are you enrolled in this class if you've already taken algebra during summer school and found it totally easy?”

He regarded me with a trace of exasperation.

Apparently it was so easy that it failed to capture his attention.

I turned my attention back to the rest of the class.

“Okay. Are we clear, everybody? Even math geniuses can occasionally have trouble with algebra, so commit yourself to working on it—at least a little!—every day of the semester. Let's see how successful you can be.”
Posted by Zeno at 1:00 PM

Some students labor like slaves at a subject, and still do poorly or even fail, while others put in minimal effort and sail through.

A colleague I had at an ESU [Enormous State University] long ago and far away, used to tell students who swore they'd worked "so hard" to pass his course, and hadn't, this story:

In graduate school, I roomed with a guy, another History grad student. We were taking one course together. I worked like a dog in that course, and barely made a B. He read assignments once, rarely put in much effort beyond that, and got an A."
"Know what I concluded from that," he asked the complaining student.
"That the teacher was unfair," the student offered.
"No, " said my colleague. "What it meant was he was a lot smarter than I was."

So I don't think I'd offer the labor-theory-of-value as a good measure of grade assignment. However much we might like to think it's true as a general rule, it isn't.

"what happens when you LOSE Pascal's Wager?"

What a stupid question to ask!

And that, of course, is why I said "usually."

The comment with that question has been expunged, onein6billion, but you're right: it is a most silly question.

Something else you might want to pass on to your students is that they need to aim for the highest grade they can possibly get from the beginning of the semester. That way, if they have an off day on a test they can still get a reasonably good grade for the class. If you aim for a 'C' and fall a little short, you're going to have to sit through all of it again.

I'm currently a student, and what I hear from the failing students at the beginning of each semester is a lot of intense calculation of how many questions they can not even bother to study for and still get a passing grade on the first test. I'm not sure who taught them that method, but it clearly doesn't work.

I quite agree with you, Joe, although I have not been aware of my students attempting to make such cold calculations of how much they can blow off without failing. (But they're not good at calculation!) I make a point each semester of telling them to work hard and earn a good grade so that they don't have to take it again!

I've found that there are always "little things" which have got to get done: if I'm writing a report, then there'll be pictures which need to be cropped, recaptioned or converted from one format to another. If I'm working on the paper with somebody else, they'll have botched the bibliography. Fixing any single "little thing" doesn't require much deep thinking or substantial length of time, but one has to finish them all, and leaving them to the end makes the whole effort drag out in a way I find very tiresome, psychologically. So, even if I've gotten nothing else done, I can spend twenty minutes squaring away those details, and I can feel good knowing that I'd have to get to them eventually, while it's far less tedious to do them as I go along.

Excellent point, Blake. The niggly little bits are always there and make bite-size projects that can be dispatched without undue stress. When I wasn't up to tackling bigger matters, I'd do stuff like scan student papers and crop out the items that illustrated my research topic. Scanning, cropping, and resizing was rather tedious, but wasn't difficult and could be done in chunks when I had a bit of time. And then I didn't have that small-scale stuff hanging over me at the end.

When I read these bits of wisdom, I'm often reminded of one from one of my favorite math professors that came as a big shock to a lot of the class. Paraphrasing:

"I don't know where people get the catch phrase that, 'learning is fun.' Sometimes learning is fun, but sometimes it's boring or even downright miserable. Sometimes, you just have to sit down and do calculus until you get the hang of it. Once you've done the learning, *knowing* calculus is fun."

Sometimes, we take our eyes off of the ultimate prize.

This is such great advice! I'm going to start doing this with my thesis proposal. I did it today and it already worked: I planned to spend 15 minutes and I ended up spending 30.