The morans find their savior

This is too easy. But that's not reason enough to pass up the opportunity.

For several weeks it was bruited about that Sarah Palin would make her first post-gubernatorial public appearance at the Reagan Presidential Library before an appreciative audience of hero-worshiping Republican women. The Simi Valley Republican Women were doomed to be disappointed, however, when Palin seized another opportunity to quit.

Palin or her staff could have quashed the story about her planned appearance at the shrine of St. Ronnie, but for some reason they didn't address it until the week before the announced date. That's not very good public relations work, is it? One might even say that it smacks of an incompetent staff. If, on the other hand, it was a deliberate decision to keep the option open till the very last minute, it bespeaks instead a real lack of concern for the discomfiture of her fans.

There were also criticisms of Palin's choice of Facebook as a medium for distributing her statement declining the opportunity to speak to the GOP women of Simi Valley. I don't take that complaint too seriously. Facebook was an effective way to get the news out—but Palin should have used it at least a month sooner.

Facebook is also a good venue for addressing Sarah's enthusiasts, many of whom crawled out of the woodwork to defend their idol's clumsy handling of her public schedule. I excerpted some of the most delightful comments from Palin's Facebook page:

Kimberley
Sarah, I think you would due this country good. I am so proud of you for standing up to the Media cause they are so librel it's aweful, I only watch Fox New's!!God Bless you & your family!!
Fri at 7:16am

The Palin posse appears to have significant overlap with Mensa.

Sue
Sarah Palin is the strongest women I know. Soooo honest.
Fri at 9:02am

Like when Gov. Palin said that she told Congress “thanks, but no thanks” for the Bridge to Nowhere earmarks—even though she didn't—but which she managed to accept anyway.

David
Read the post ladies and gentlmen. Down at the bottom. I'm sure they put palin's name on all the invitations to pull more people into the event. And she doesn't want to sponsor something she has no intentions of being apart of. Go Sarah, do what's right in Gods eyes, screw the repubs and demos, start a real conservative party based on biblical principles, fiscal and social conservative values and morals. Thank You sarah for being unafraid of the machines that run the sheeple, go Palin!!!
Fri at 1:58pm

Now we're talking! Sarah can lead the True Believers out of the Republican ranks and into a godly new conservative third party. Sounds good to me. But who, exactly, do they think they'd be leaving behind in the GOP rump? Liberal Republicans? Unchurched Republicans? Maybe the Republican remnant would be dominated by the Log Cabin Club after the exodus of the Palinites. There's a thought.

Is this the same David as the previous one? If so, Palin should make him her principal political advisor. As a Democrat, I like the way he thinks!

Sarah has a plan? I guess it's a secret plan. Even from herself.

Zoyia
Govenor Palin, is no "dummy" not a negative word but come on how many women do you know that can shoot a moose and then cook it, i don't know that many women that can hunt and eat. she is my girl!! in 2012. YOU GO GIRL. ttfn zee
8 hours ago

I am uncertain when “dummy” ceased to be a term of disapprobation, but perhaps some of Palin's acolytes wear it as a badge of honor. After reading these messages, I can see where that would be simpler than having to yell “Am not!” over and over again.

Like Zoyia, I, too, am delighted that Sarah Palin can both hunt and eat. Anyone who cannot eat should be disqualified from seeking high office. It's a modest enough prerequisite, although one should avoid making too much of it. As Katharine Hepburn said in another context in The Lion in Winter, “She smiled to excess, but she chewed with real distinction.” 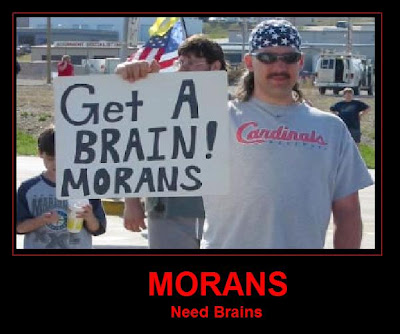 Does Larry know about this?

I can't fault them for the due/do mixup. I've been listening the Susskind lectures, and I still find that particular merger amusing (I also mumble ARRRRRRGH every time he mentions the curvature tensors - I hadn't realised just how non-rhotic I'd grown).

Trying again, maybe the comment will stick this time...

I am uncertain when “dummy” ceased to be a term of disapprobation, but perhaps some of Palin's acolytes wear it as a badge of honor.

the Captcha today is "paliation"

"Anyone who cannot eat should be disqualified from seeking high office. It's a modest enough prerequisite,..."

Ah, but is it? Asimov wrote about that very problem a long time ago, in the last (?) story in I, Robot. Suppose, after all, that the person running for high office is accused of being a robot in disguise?

(Yeah, I know, demand his birth certificate. There are levels of stupidity that even Asimov could not prophesy. But I digress.)

But hey, a robot doesn't eat! And if there's a logical weakness in using that as a way of showing that the candidate is human, it did not escape Asimov.

Though, speaking of stupidity, he misattributed the "gods themselves struggle in vain" to Nietzsche, when it's really Schiller.