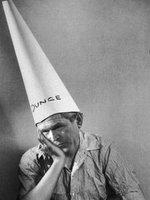 Pitching in the Bush league

Fellow citizens, it is time to come to the president's aid in his time of need. Word came out today (March 6, 2006) that George W. Bush has to make a special trip to Texas because he doesn't have an absentee ballot for tomorrow's primary election. Mistakes were made, so the moment has come for excuses. What excuse should the White House give for this new snafu, the latest in an unbroken string of cock-ups, although trivial by comparison with most of the others? Let's put on our thinking caps:

My own favorite explanation is different from any of the above:

Now what can we do to make him stay there?
Posted by Zeno at 1:51 PM