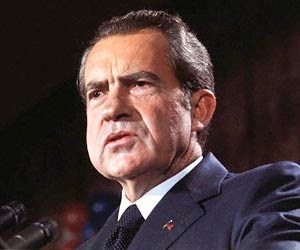 It's the 40th anniversary of the resignation of our much-unloved 37th president, the only one of the nation's chief executives to have departed in this manner. Therefore it's natural to look back on Nixon's shameful example and attempt to draw lessons that we might usefully apply today. Of course, if you're a right-wing pundit you might prefer to distort things beyond all recognition as you declare that Nixon's crimes are ever-so-similar to what Barack Obama is currently doing. Here's how Ben Boychuk does it:


Nixon broke his oath of office. He disregarded “his constitutional duty to take care that the laws be faithfully executed.” He “repeatedly engaged in conduct violating the constitutional rights of citizens.” In particular, Nixon used the IRS, the FBI and the Secret Service to harass and punish his political enemies, alleged the second of three articles of impeachment that the House Judiciary Committee approved in 1974....

Perhaps the same could be said of Obama. His IRS singled out tea party and other conservative groups for excessive scrutiny, although nobody so far has managed to turn up the proverbial “smoking gun” linking the president to those abuses.

That's right. Boychuk is flogging the multiply-discredited “IRS scandal,” neglecting its origins in the cherry-picked factoids disseminated by the deliberately dishonest Darryl Issa. As a result of a deluge of new political groups claiming 501(c)(4) tax-exempt status, the IRS gave a lot of attention to so-called “tea party” groups—and liberal groups, too, though you wouldn't hear that from mission-driven Issa.


Obama has been lax, at best, about taking care that “the laws be faithfully executed.” From waivers to the Affordable Care Act’s mandates for unions and politically connected businesses to invoking “prosecutorial discretion” to exempt 1 million illegal immigrants from deportation, Obama has pushed executive authority to the limit.

Now the president is mulling an executive order that could, in effect, grant amnesty to some 6 million illegal immigrants. Yet the Constitution clearly reserves the power of “naturalization” to Congress, not the president. Does that matter anymore?

Boychuk spins the notion of “waivers” from the ACA as if they are exemptions handed out as political favors, rather than executive decisions based on easing the implementation process (something President Bush also did for Medicare Part D and which the Supreme Court deems within the president's executive authority).

Note also Boychuk's invocation of the N-word: naturalization. Whether or not Obama issues executive orders affecting the status of undocumented residents, he will certainly not be offering them “naturalization,” which entails citizenship and voting rights. That, however, is what Boychuk wants to imply, causing tea-partiers to clutch their pearls and swoon. Given complete inaction by the House of Representatives while a continuing crisis percolates on our southern border, the president will have to act without the assistance of the derelict legislative branch. It is well within his authority to declare that no one will be denied due process and summarily deported.

Although Boychuk claims that the president is pushing his authority “to the limit,” it is an obvious and necessary perquisite of his position to set priorities. Shall we haul the so-called Dreamers into court and prosecute them as illegally residing in the country where they've spent their lives since childhood and deport them back to native lands many of them don't even remember because of their youth when their parents brought them across the border? The Department of Justice has enough to keep it busy without also taking on foolish and unfair prosecutions of life-long residents.


Violating the oath of office? Usurping congressional authority? Using the might of the presidency against political foes? Not trivialities. Or, at least they weren’t 40 years ago.

And they're not trivial today, either. They're merely nonexistent.
Posted by Zeno at 8:30 AM

To steal a line I saw on another blog, Obama certainly likes living on the edge -- he's only one impeachable offense away from being impeached!

And yet despite what Boychuk says, all the conservative trolls will claim the Sacramento Bee is part of the liberal media.

Well do I remember those days. Particularly the pearl-clutching of the Serious People when they learned of the dancing in the streets (well, anyway Telegraph) in Berkeley that night. Highly regrettable. Why, I myself regretted that I hadn't been there.