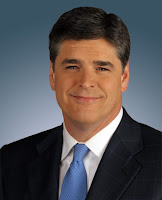 As a rule, I do not listen to Sean Hannity's predictable right-wing blather. He's a Seanny One-Note who harps on Obama's supposed misdeeds and can be readily summarized by “liberals bad, sufficiently crazy conservative nutbags good.” Today, however, he delivered a priceless nugget while self-importantly explaining the universe to his dutifully credulous listeners. Not having subscribed to his podcast (I'm not completely crazy), I may not have captured his words with perfect verbatim fidelity, but this is very, very close:


Perhaps in the future some young people will look back and remember this period of history. I name it for you now: the Era of Radical Extremism.

Couldn't have put it better myself, Sean!

As you might have guessed, he was pontificating on the excesses of the thin-skinned Muslim rioters (and the extremists who used them as cover to attack our embassy in Libya), but the Era of Radical Extremism perfectly characterizes the Tea-Party-drenched cult that is today's Republican Party. Eisenhower would be read out of today's GOP for his boldness in denouncing the military-industrial complex. Goldwater would be repudiated for embracing gay rights. Ronald Reagan would be in danger of getting blacklisted for his signature on a series of tax-increase measures (both in Sacramento and Washington, D.C.), but that would be too inconvenient, so today's Republicans prefer to worship a carefully edited icon of Reagan, the awkward bits of his history consigned to the memory hole.

Thanks for the nice label, Sean. I hope you wear it proudly!
Posted by Zeno at 4:00 PM

Not to mention Reagan's actions on immigration. He signed a bill into law that actually did grant amnesty.