Publicity coup of the century! 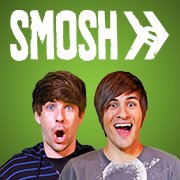 Of course, the century is young

The cover of my novel has now been viewed more than 900,000 times on YouTube. Can one million be far behind? No doubt bestsellerdom is right around the corner!

Or perhaps not. This “publicity coup of the century” is certainly amusing and entertaining, but I fear that it's no guarantee that my book will be eagerly snatched up by titillated YouTube viewers. One is permitted to doubt that YouTube is teeming with readers of the modern novel. However, if only one percent of the viewers were to flock to their bookstores or order my novel on-line ... pause to do the math ... omigawd! ... that's six times the original press run! Let's get started on the second printing! (Yes, small university presses are parsimonious with their initial commitments. I'll bet that movie rights are still pretty cheap right now.)

Anthony Padilla and Ian Hecox are two young men from the Sacramento region who in 2006 had the single most popular video on YouTube (with nearly 25 million hits). Their video channels continue to be among YouTube's most widely viewed. Their Smosh.com website offers merchandise, games, and third-party animations, all part of Ian and Anthony's burgeoning entertainment enterprise.

I first stumbled across them because they were local (and, no, neither ever enrolled in one of my classes, so I don't really know them). Their cracked sense of humor may be an order of magnitude (and a full generation) beyond mine, but I started to think of them again while pondering my situation. How does a first-time novelist get some notice for his book if his publisher is a small university press with no advertising budget? Hmm. The obvious answer is free publicity!

It hasn't gone too badly. For example, I got on local TV as a stand-in for Star Trek's William Shatner. (Nope. Not kidding. Go look up serendipity in your dictionary.) The next step, of course, was intergalactic fame. Or, at least, world famousness. That's where Smosh came in, the megahit YouTube channel. I knew that the boys had a recurring feature titled “Mail time with Smosh,” during which they would comb through the booty found in their post office box. Imagine how delightful it would be if Anthony or Ian were to hold my book up in front of their video camera and gush over its excellence!

No, I did not think of this during a drunken stupor. Honest. I don't drink. The idea came to me while I was stone cold sober.

So I sent Smosh a letter touting the glorious features of my book. Strangely enough, I omitted my book's title and mailed the letter anonymously. That's right. It was a teaser.

A week later, I did it again. There were a couple of new items added to the teaser list. Still no title or author name, though. I wanted Anthony and Ian to be aware that there was something to anticipate in their future mail. Given the tonnage of fan mail that Smosh receives, I figured it was worth investing some effort in gaining their attention. Finally, of course, I mailed them the book, including the final version of the teaser list:

Here now! A book full of Anthony & Ian’s favorite things!
The only book in the known universe to contain the sentence “Jesus didn’t like having his dick shortened”!

My efforts were deemed worthy of Smosh's attention. On July 23, 2012, the boys posted another installment of “Mail time with Smosh” on their IanH channel. They devoted 30 seconds out of their six-minute video to my novel. Anthony started the segment (at 1:25) by effusively gushing, “Oh, my God, guys! We got the best book ever! It's a book full of all of our favorite things!” Tongue firmly in cheek, I'm sure, but one has to appreciate the cooperation.

Check it out for yourselves. (Then go out and buy copies of my fabulous Smosh-endorsed book!)

What's next? Well, I can't rightly say. (For one thing, I think the Vatican post office strictly screens the mail.)

Oooh, would you please be my publicist for my books?