Leon Lederman has a lot to answer for. He famously branded the hypothetical Higgs boson as the “God particle” in the title of his 1993 book on the subject. As a stroke of marketing genius, however, it's undoubtedly had him chuckling all the way to the bank. It follows that recent news from CERN has resurrected the divinely-inspired term, as well as rousing into action the usual crowd of scientific illiterates. A representative of that obscurantist cohort popped up in the letters column of the July 7 edition of the San Francisco Chronicle:


The sages have been telling us for many, many centuries that God or love dwells within our hearts as ourselves. This is found in meditation and costs nothing.

The physicists' instruments have cost millions and are just getting a little glimpse of what is found in totality in meditation.

Oh, yes. Meditation and occult wisdom long ago revealed the essence of the Higgs boson and its function in the Standard Model of particle physics. We could all save a lot of money if high-energy physics research budgets were devoted instead to the purchase of floor mats and incense sticks. No doubt.

I fired off a response, which the Chronicle did not see fit to publish. Here it is, in full:


I eagerly await GVM's elucidation of the difference between bosons and fermions. Surely he must know. 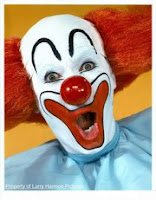 Stay tuned for the next exciting breakthrough in meditation physics. I predict thrilling new insights into the nature of the bozon, the long-posited fundamental particle of clowning. One hears that the elusive mote might yet be detected with bubble chambers filled with super-cooled seltzer!

Pity. It would have been so easy to show that he was right, if he'd just published the branching ratios. I believe there are some tantalising hints at physics beyond the SM already. Though of course only at the 2σ level.

Before you castigate Lederman, do remember that he wanted call his book The Goddamn Particle -- so frustrating the search was -- and his publisher changed it.

Great story, John. Is it really true? I thought it was just something they told gullible journalists, who then ran with it.

If it is, then every physicist in the country is just as gullible. Seriously, "The God Particle" doesn't even sound like something a physicist would come up with on their own, and I've never heard one say it's anything but a terrible nickname.

Hope you flogged lotsa books this weekend, and made some new friends to boot!