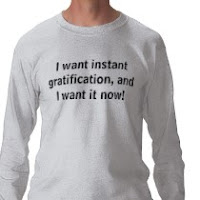 This is not a rant about students relying on things like Google and Wikipedia for their schoolwork. It's not that at all. It is instead a rumination about the tendency of some students—at least one in particular—to rely on an information-at-your-fingertips approach to education. The student I have in mind appears to have lost—to a remarkable degree—the trait of self-reliance. Let's call this student “Shawn.” He took my algebra class. He took it twice, having flunked it the first time. In both semesters I was treated to Shawn's pop-up arm, which waved for my attention at the least provocation. As a highly interactive instructor, I welcome student questions and want them to feel that their queries are welcome. Shawn, however, was trying my patience (along with that of his classmates).

It took me a while to figure out what was going on. Ever in the moment, Shawn had abandoned thinking. If something—anything—gave him pause, his arm shot up. He wanted immediate clarification from the instructor in preference to actually thinking about it himself. Somewhere along the line he had discovered that the path of least resistance involved asking the professor.

Back in the old days before the World Wide Web and Google, I sometimes fussed for hours (or even days), wracking my brain trying to recover some odd bit of information. I'd pull books off the shelf and page through them. Did I read it in this one? Should I dig out the encyclopedia? Did a friend mention it to me in conversation? Should I try calling him? (Which one?) As you may have heard, we call these the “good old days.” I confess, however, that the Internet and Google have become two of my most cherished friends. Facts and factoids are at my fingertips and I discover or rediscover things with alacrity and pleasure.

Shawn doesn't have Google in the classroom. He has me: Professor Instant Gratification. (I had a lesson to learn as much as Shawn did.)

The starkest example of Shawn's abandonment of thinking arose during a lesson on nonlinear systems of equations. I had created an elementary introductory problem involving a parabola and a line, writing their equations on the board and telling the students we were going to discover the points where their graphs crossed each other. The computations were straightforward (amazing, isn't it, how simple the answers are for Example 1?). Then I told the students we were going to examine the plausibility of our solutions by graphing the two curves and considering their appearance.

I plotted two points (the axis intercepts!) that satisfied the linear equation and sketched the line. Shawn was keeping his peace and presumably keeping pace. The quadratic equation was a little more challenging to graph, but it was still pretty elementary, so I created a short table of values to find some points that would help us sketch the parabola. In rapid succession, I plugged in x = 0, x = 1, and x = 2.

“How did you compute those values?”

“The values in the table?”

“Yeah. Where did those come from?”

Mind you, we had done the parabola to death in the previous chapter. We had graphed vertical parabolas and horizontal parabolas. We had found their axis intercepts with the quadratic formula (if necessary). Several old quizzes and the most recent exam had featured the parabola most prominently. All of the students, including Shawn, had had multiple exposures to the mundane task of plotting a parabola. He had had even more examples of plugging in conveniently chosen numbers to evaluate algebra expressions for graphing. Shawn's question was extraordinarily lame.

“Shawn, I want you to think about that.”

“I want you to think about that. I'm finding points that lie on the graph of a parabola, picking x's and computing y's. You've done that yourself, right?”

“Right,” I said, hoping that he was indeed right in what he was thinking.

It was not easy, but “think about it” became a standard response to many of Shawn's too-quick questions. By degrees, he eventually became more self-reliant instead of instantaneously asking the professor. He never learned to postpone gratification to quite the degree I would have liked, but he got a little better. He stopped asking questions without thinking and I stopped answering so automatically.

And Shawn's classmates got more rest for their eye-rolling muscles. 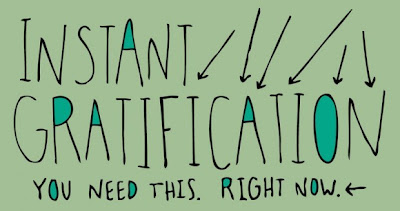 I don't think that the problem is the instant gratification of the Internet, I think the problem is that people are becoming sort of virtual cyborgs. They rely on their Internet history to be their memory, and don't actually bother remembering things themselves.

I'm a movie buff, and the Internet has allowed me to become a walking IMDB. The Internet has allowed me to learn all sorts of extra things, that I would have only dreamed of when I was reading through encyclopedias and Trivia Pursuit cards looking to learn things. For other people, people who were already disinclined to learn things for the sake of knowing, I guess they will be walking around empty of knowledge, because they assume that the information is only a click away.

Feh, "ye goode olde days" sucked. I cannot even begin to imagine how I could ever translate a book without Internet access for background info, fact-checking, finding contexts for words/phrases, communicating quickly/cheaply with colleagues around the world, etc. At minimum, my job would take much longer if I could only consult hard-copy references, especially those not available in the public and university libraries near where I live (since even using Inter Library Loan would take forever to check without the Internet) -- while a lot of details would simply never be checkable prior to publication. Then there's snail mail between the US and Portugal... well, fuhgeddaboudit, it can take anywhere from 8-10 days to 6 weeks, depending, and intercontinental long distance was prohibitively expensive. Throw in all the fascinating and/or useful colleagues I've met online (pixel pals?), and in some cases eventually in person, and I'd never go back to the pre-Internet era. (Yeah, yeah, I know, you can lead a horticulture but you can't make her think).

Sorry, this is why I don't teach. A good friend and I went through the same graduate program together... and now she's a lecturer at the university we attended. She loves it. How to get students motivated... how to present problems so that they learn... how to improve over last semseter's work -- these questions motivate her.

I would strangle the bastards for not paying attention.

Zeno, I have absolute awe for you, my friend, and others in your profession who actually enjoy teaching.

Before universal literacy, people were, on average, much better at memorizing stuff - because they couldn't write it down to look up later. Otherwise, oral tradition would have deteriorated so quickly as to be useless.

I'm pretty sure people had very similar conversations back then.

Is that little boy in the 2nd photo the young Newt Gingrich?

Is there any possibility that "Shawn" knows full well that he's "sending up" his teacher, so behaves this way on purpose in order to gain attention (or for more sinister reasons, e.g., to torment teachers out of sadistic delight)?

No, Kathie, I don't pick up the slightest clue that Shawn was having me on. And I also don't see any clue that he had the chops to pull it off. (So perhaps he was an evil genius, like the young Newt Gingrich — before he became a middle-aged buffoon and laughingstock.)

Confession time: I once took a programming class where the instructor MUST have been a weekend auctioneer. Nobody talks that fast without practice. Many times, he'd write something on the board and leave me in the dust with his explanation of it. So I'd ask a question about something I DID understand, so I could tune him out for a few seconds and think about what I didn't understand. Worked for me. I got comments from classmates that it was working for them; they were just not brave enough to do it themselves. He HATED me, but he was at heart a very honest person, and gave me the A I deserved.

After four years of Jesuit Prep school, I was thrust into the cesspit of a State University. 40 years later, I still hear tales that remind me how the class (20 students, 100 students, whatever)can be ground to a halt by the insistent questions, interjections and plain poor manners of the least prepared students. I hated them then, I ... Well...