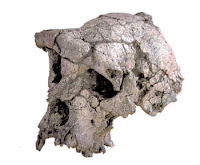 I can always rely on Acts & Facts from the Institute for Creation Research to provide me with some wrong-headed diversion. The November 2009 issue was no exception.

ICR makes a fetish of appending academic degrees to the names of the authors in its publications. It's probably supposed to give their articles a veneer of scientific credibility. Brian Thomas, the writer of Did Humans Evolve from “Ardi”? glories in the possession of an M.S. He is featured in Acts & Facts as a science writer—at least, that's what they call him. In this role, he takes on the classification of Ardipithecus ramidus as a likely human ancestor and the unresolved questions that are still being addressed.

Speculation and evolutionary guesswork, not scientific observations, are offered to bridge these gaps. Consistent with this is the broad use of speculative verbiage on the part of the authors. In the eleven papers in Science, the word “probably” appeared about 78 times, and “suggest,” “suggesting,” “suggestive,” or “suggests” were used 117 times, among other terms that are associated with an unsubstantiated story rather than a scientific description.

I find this interesting. The ICR's “science” writer, who holds a master of “science” degree, appears to think that tentative conclusions have no place in scientific publications. What is that degree in? Political science?
Posted by Zeno at 11:30 AM

It is an odd thing to not be able to find that out, even when Brian Thomas, M.S. is a "special lecturer" at a school (the ICR School of Biblical Apologetics).

Perhaps he has an M.S. in Biology from the ICR Graduate School. According to their website "Graduates who write an M.S. thesis are expected to select some topic which will contribute both to their scientific field and also to the advancement of scientific Biblical creationism."

I quite agree, Miki. I spent a few minutes poking about the ICR website without discovering any CV for the esteemed Brian Thomas, M.S. It seems like quite an oversight to omit the credentials of their personnel. Perhaps there's a reason that they hide them.

Both ICR and AIG (and creationists in general) have very confused views of science. Sometimes they trumpet the uncertainty of science which is "always changing" against the unchanging word of God. And here they try to claim that scientists not being absolutist and using careful language makes it unscientific. Quite confusing.

He seems to have graduated from the same school of punditry as the silly people who're hung up for shame on LanguageLog. Simple wordcounts in place of proper analysis (aka Obama sez "I" too much). How does he know that "probably" is not part of "probably not", "suggesting/-ive" "isn't suggesting/-ive" and so on.

wv: digrast - it's a disgrace how they digress?

Even if the words are properly analyzed, wouldn't it be simpler to just refute the argument made in the paper you're criticizing?

Unless, that is, there's some good reason for being unable to do so.