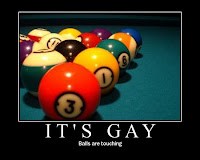 This is not what you think it is

No, this is not a post about Conservapedia's hilarious project to create a more conservative Bible translation. Plenty of sharp bloggers have already offered wry comments on Andy Schlafly's misbegotten endeavor.

A post on Daily Kos drew my attention to a wacky editorial in the Portland Press Herald endorsing the anti-gay Proposition 1 on the Maine ballot. Orono resident Linda E. Pletka is the writer. She is upset about the possibility that Maine's voters will allow a marriage-equality measure to become state law by opposing the Proposition 1 referendum:


Do a majority in Maine really wish we would revert back into a heathen nation?

“Revert back”? Those words are an indication of the fantasy world in which Ms. Pletka resides. The correct phrase is “advance forward.”

But the writer wants us to know that she has the Bible on her side. For some people, that's a pretty powerful argument. The bachelor saint Paul of Tarsus was pretty explicit in his letter to the Romans about how much he disliked gays, perhaps because they used to flirt with him (or perhaps because they didn't; maybe it was his companion Timothy who got all the action). But Linda Pletka doesn't quote St. Paul. No, she doesn't settle for epistles. She goes straight for a gospel:


“What God has joined together—as he made them, man and woman—let no man put asunder.” (Mark 10:9)

The interpolated phrase “as he made them, man and woman” is missing from the King James Version. (Perhaps the king's boyfriend made him leave it out.) But the New International Version is no more helpful to Pletka's cause:


“Therefore what God has joined together, let man not separate.”

Oops! It's just not there.

Make no mistake. The rest of Mark 10 makes it abundantly clear that the topic is opposite-sex marriage. I am not arguing otherwise. I am merely pointing out that Ms. Pletka has taken it upon herself to rewrite the Bible. How dangerous! If this gets out, her most devout fellow-travelers might find it necessary to stone her or burn her at the stake.

You can't be too careful when it comes to Christian love.

One of the comments on the Portland Press Herald website may have said it best:

This op-ed piece couldn't come at a better time for the No on 1 campaign.

That's what Mark would have said had he thought anybody needed to hear it!!!!

I always liked Gerry Studd's answer to arguments that the Bible banned homosexuality. He pointed out that the same section of the Bible also bans eating shellfish. As the first openly gay representative from Cape Cod, he wasn't going to upset his constituents by enforcing either biblical ban.

Well, lying for Jesus is not really "lying", you know...

Some people may be (have been) into that kinda thing, but I, personally, do not find Paul at all attractive.

So, yeah, I think he was upset with the lack of attention.

Sili: You just called Saul of Tarsus, Apostle to the Gentiles, author of a huge chunk of the new testament, and in fact the real founder of Christianity as we know it, a "wanker".

Is your vocabulary really so lacking in stronger condemnations, or were you just keeping it clean for the sake of the kiddies?

Well Stuart, I suspect that Sili believes a minor pejorative is all that is necessary: diminishing further by the small means of diminishment and all that.