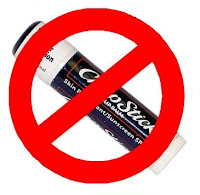 To stop smacking my lips

I gave it up cold turkey in February. I simply stopped dabbing ChapStick on my lips, ending a habit that must be over forty years old. (I remember having a tube of ChapStick—the old metal tube—in my pocket in high school.) Just like that I rang the curtain down on an addiction that has seen several clothes-ruining episodes of ChapStick tumbling about in the washer and dryer. Just like that I gave up the sensuous comfort of wax-slickened lips.

For the most part, anyway. There's still a tube in my pocket, just for safety's sake. Just in case the withdrawals become too acute.

I've slipped only once. No, really, only once. It happened without thinking. It was cold early in the morning, the wind had picked up, and I bustled into my office sniffing and snorting. My lips were dry and I was entirely on autopilot as my hand snatched the ChapStick from my pocket and I was swiping away at my everted epithelium before suddenly realizing that I was falling off the wagon.

That happened last week. It was my one slip during the past six weeks, which means I lasted over four weeks before the unconscious backsliding. If I had been brave enough to banish the ChapStick from my pocket it would not have occurred.

But it's still there, there in my pocket, tempting me.

I fell into this long-term habit quite innocently, of course. My mother noticed that I had given up chewing my nails (a grammar school habit) and moved on to chewing my lips. Chewed-up nails might be unattractive, but chewed-up lips are even worse. It was Mom who took me in hand and introduced me to the sleek enamel-black tube with the white cap. Soon a tube of ChapStick was my constant companion and I was routinely repairing my labial damage with anointings of processed beeswax and petrolatum. Bliss!

Not even the annoyingly perky Suzy Chaffee commercials of the 1970s (“You can call me ‘Suzy ChapStick’!”) could drive me away from my new addiction. I was hooked and loving it.

Over the decades, though, I began (very slowly) to consider the nature of my chemical bondage and the degree to which ChapStick had enslaved me. What it popped up in a Katy Perry song (“the taste of her Cherry ChapStick”), I realized how ChapStick had become an unremarked element of our social fabric and environmental background, taken completely for granted. Perhaps that sparked an element of rebellion and helped me recognize my dependency. I stopped using it. Next, I'll stop putting it in my pocket every morning. No more ChapStick.

But I still want it!

Okay, I'm iggerment. Spreading Chapstick on one's lips is a healthy habit, especially if you use the sunscreen variety. So what's the post REALLY about? Somebody please clue me in to the metaphor.

I don't wanna tell you how we used to alter that phrase, in mocking the commercial. Let's just say that it had some of the same letters, including the beginning and the end, and one fewer in total.

Yes, that was a horrid advert, indeed.

I just use plain petrolatum. (Twice daily, though.)

I don't recall how old the chapstick in my pocket is, but the text has worn off by now ...

I'll admit it -- I'm a lip balm addict. I wear it pretty much constantly from October until May, and at night the rest of the year. You would too, if the alternative was lips that cracked open and bled just about every day if you didn't...

I'm with Karen:
what's the problem of using lipbalm? Or is there a hidden joke behind this?
Hmmmm, there must be a joke somewhere in this post...

Karen & João, I'm afraid my usual penchant for subtlety and veiled significance has misled you. This is a very straightforward post. Many people have developed a silly dependency on ChapStick that is nothing more than an ingrained habit. While some folks may have Interrobang's sensitive lips, I suspect most of us just have an unexamined (and induced) dependency. In my case, I clearly don't need it, but I was sure used to it.

By the way, there are conspiracy theorists out there for every wacky notion you can imagine, including the idea that ChapStick contains drying ingredients that force repeated use. Just google "chapstick addiction" to see how many seem to believe this. I happen to think it's just habituation.

When you think you've seen it all, reality slaps you in the face with something weirder. But I guess you're right, there's a conspiracy theory for everything you can imagine. I would NEVER have thought that even lipbalm could be used to start another one...

P.S.- It's been a long time since you last posted about your political "disagreements" with your father. Call me "coscuvilheiro" if you want to, but I love those posts. :)