The senior member of my Friday lunch group is fascinated by words and homes in with his highlighting pen on unfamiliar expressions in his reading material. Browsing through one of his books is like examining a manuscript illuminated in pinks and yellows and blues. Today, though, he brought along a book that he had left completely unmarked. No wonder, either. He would have needed the paint-roller version of highlighter to flag virtually every word on every page of Jeffrey Kacirk's The Word Museum: The Most Remarkable English Words Ever Forgotten. The subtitle is not completely accurate (we found a few entries we have never forgotten), but Kacirk's book is certainly replete with obscure words.

During a lunch discussion that wandered through the topics of opera, sports, politics, and health, I borrowed the book and paged through it. Some of the words stood out as instant favorites. With the encouragement of my lunch companions, I began to string them together into a little story. Not only was it amazingly easy, as if the story wanted to tell itself, it was almost immediately apparent that the story had to be about Ann Coulter, although I doubt that this could have been Kacirk's selection criterion for the words in his book. Observe. Story first; glossary second:

As she plies her trade as a self-proclaimed snoutfair and prunk dispenser of scaum, we can imagine she cut her teeth as a flarting nazzle. Time, however, is not the ally of this cock-throppled fishfag, now well on her ostentiferous way to becoming a dwizzen-faced hurrion. She may not anticipate her condign fate while still basking in the puzzomous regard of the national media and girding her loins in defense of the rhonchisonant quockerwodger in the White House, but she will end up well and truly scunt. 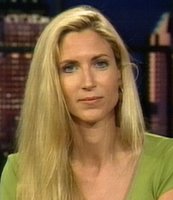 My favorite word in this brief cautionary tale is cock-throppled, which deserves to be brought out of retirement specifically for Ann Coulter. Here are the definitions of the obscurities, excerpted directly from The Word Museum:

cock-throppled: Having the “Adam's apple” largely developed. From thropple, the wind-pipe.
dwizzen: To shrink and dry up; to have a parched appearance, as withered fruit, or the skin of old people. A skinny-looking person is dwizzen-faced.
fishfag: Originally a Billingsgate fishwife; now any scolding, vixenish, foul-mouthed woman. SEE tongue-whaled, xantippe.
flarting: Mocking, jeering.
hurrion: A slut. So called from hurrying on things, or doing them so hastily and carelessly that they are not well done. SEE ferry-whisk, fluckadrift.
nazzle: A child who has been guilty of deceptive practices is termed a “little nazzle.” Never applied to the male sex.
ostentiferous: That which brings monsters or strange sights.
prunk: Proud, vain, saucy.
puzzomous: Disgustingly obsequious. 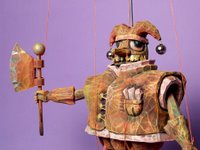 quockerwodger: A wooden toy figure which, when pulled by a string, jerks its limbs about. The term is used in a slang sense to signify a pseudo-politician, one whose strings are pulled by somebody else.
rhonchisonant: Imitating the noise of snorting.
scaum: Insincere talk; banter. One listening to a letter being read will, at a characteristic passage, say of the writer, “That's like his scaum,” like his trick of talk, being more humorous than sincere. The term is also applied to scornfully abusive language.
scunt: Bankrupt; used in marble games. When a boy has lost all his marbles, he is said to be scunt. The word appears to be a variant of skinned, which is used in the same sense.
snoutfair: A person with a handsome countenance. SEE bellibone, cowfyne, pigsnye.

This is a game the whole family can play. Get yourself a copy of Kacirk's The Word Museum and create your own orotund morality plays. And don't worry too much about Ann. As long as you're talking about her, that stultiloquent spoops will be happy.
Posted by Zeno at 4:00 PM

That reminds me of the dictionary game my friends and I would play in high school instead of learning Algebra 2 (that's not why I suck at math).

Did you ever play that, where you pick an obscure word, and the other players choose from among the two or three fake definitions you make up along with the real one? Nerdy fun.

Oops, I just saw that you are a math teacher. I apologize for not paying attention in high school and for using really awful grammar in the above comment. :sheepish

National Public Radio broadcasts a program called Says You! in some areas. It includes a version of the game you describe, where one player on a team has the correct definition and the other two bluff. The members of the rival team try to figure out who is telling the truth and who is making it all up. I try to catch it whenever I can, since it appeals to my nerdy side. (Indeed, it may be the only side I truly have.) Click here for the Says You! website.

And thanks for the comments, although I'm naturally horrified by your confession that you didn't always pay attention in Algebra 2.