Don't snort Cheerios. It's bad for you. Of course, that's one of the risks naturally attendant on the practice of reading the comics while spooning up breakfast. Beware.

My loudest laughs this morning were provoked by Lío, a new comic strip by Mark Tatulli. Lío debuted in May with more than 100 newspapers participating in its launch. The June 1 installment showed Lío, the little boy who provides the strip's title character, placing a crank call to Charlie Brown of Peanuts fame. First I laughed. Then I started thinking.

Humor is highly situational. Not just the situation described in a joke or depicted in a skit or drawn in a comic strip, but also the situation of the participants in the humor, the joke-teller, skit-actor, comic-strip artist, and the person who hears the joke, watches the skit, or reads the comic strip. We're all in it together and the impact of the humor depends crucially on our shared experience. You don't “get it” unless in some respect you already have it.

The Lío strip was composed of several layers. Let's peel them apart and consider for a moment what you needed if you were going to laugh at the punch line.

A kid playing a trombone into a telephone is pretty funny all on its own, so there's a visual gag almost anyone can appreciate. Hmm. Why the mute? What's going on with that? It's funny to see Lucy Van Pelt and Charlie Brown in the last panel, the cartoonist's homage to Charles Schulz, but what does it take to catch the real gimmick of the comic strip? The reader must not only recognize the Peanuts characters, he or she must also have seen and remembered at least one of the many animated Peanuts programs that appeared on television. It was only in the TV programs and not in the comic strip that the wah-wah sound of a muted trombone was used to represent the voices of the off-stage adult characters (especially the teacher in the frequent classroom scenes).

Lío is asking a lot of its readers, but it's talking to my generation. After decades of reading Peanuts comic strips and no doubt dozens of viewings of animated Peanuts specials (A Charlie Brown Christmas, etc., etc.), I was perfectly prepared for cartoonist Tatulli to push my buttons, as indeed he did. Humor is conditioned by our shared experiences, which is something to keep in mind the next time you try to tell a joke and someone just doesn't get it. It might not be your fault.

There were two other things I noticed about this installment of Lío. Although the strip is less than a month old, it's already departed from its announced format:

First LIO has no dialog. It tells stories only with images—a “pantomime strip” says Mark Tatulli, the creator.

As you can see, today's strip definitely contains dialogue. If the aim was to make Lío a universally entertaining comic strip, independent of language, it seems that Tatulli has given up on that goal rather quickly. I noticed, however, that the “only with images” claim had already been breached in other ways. In the Sunday strip where Lío is enjoying a stimulating round of The Game of Life with a morose Death, we're expected to read the name of the game from the label on the box. In the daily strip where a spider helps Lío ace an exam, we're supposed to understand the meaning of “A+” on his paper. Trying to do it all with sight gags is apparently too much of a straitjacket for Tatulli. I can hardly blame him, but his publisher, Universal Press Syndicate, may have put the cartoonist in a tight spot:

“The fact that there is no dialogue and that everything is art-driven is exceptional,” added John Vivona, vice president of sales at Universal. “If there were ever a strip that knew no demographic boundaries, this is it.”

Universal also thinks “Lio” has strong international potential because there are no language barriers. So far, the Brussels, Belgium-based Bel De Morgen newspaper has picked up the comic.

Do they give letter grades in Brussels? 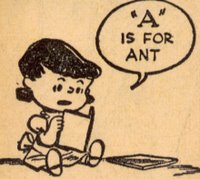 I said I noticed two things, the first being the prompt lapse in the original premise of the comic strip. The second was the appearance of Charlie Brown and Lucy in that last panel. In particular, Lucy's depiction conforms to the earlier Lucy model of the 1950s rather than her later look. Check it out. I think Tatulli made a deliberately retro choice and it adds charm to his strip. If you share my experience of having seen the Peanuts characters in the newspaper when they were brand new and before they had become a cultural phenomenon, perhaps you'll agree.

I look forward to future appearances of Lío in the funny papers, pantomime or not. This is clever stuff.
Posted by Zeno at 9:32 AM

There was a new prisoner assigned to bunk with one of the really old timers. The old timer said he and the other prisoners had been there so long they could all laugh by just calling out a number. The old timer, to prove his point, yelled out "three." The prison rocked with laughter. The new prisoner thought he'd try it. "Four." No laughter at all; not even a peep. What happened asked the new prisoner? Well, son, some people can tell a joke and some can't!

In Belgium (at least in Flanders, since education is a matter of the states, to use an American term) numbers are more used.